In 1937 a major project was undertaken in Irish primary schools to preserve the folklore and traditions throughout the country. Pupils from 5th and 6th classes (aged 11-14) were asked to collect  the traditional cures, prayers, proverbs, curses and local history from their parents and grandparents. This was then written in special copybooks in school and transferred to the National Archives in Dublin for preservation. Over 5,000 pupils took part in the project and a vast collection of folklore was preserved for future generations. In 2010 the  Irish National television station R.T.E. decided to commemorate the 75th anniversary of the folklore commission with a series of programmes called Ó Bhéal go Béal. (From Mouth to Mouth) In the third programme four people were interviewed who had taken part in the project in 1937-38 when they were in primary school. Now in their eighties, these four people were shown the manuscripts which they had carefully written down 72 years previously. One of the people interviewed was Criostóir Ó Tuama, who was principal of our school in Newmarket from 1953 to 1988. Mr Ó Tuama had collected the folklore from his grandmother who was 96 at the time. Mr. Ó Tuama is a native Irish speaker from Ballyvourney in West Cork and his description of the prayers and sayings of his grandmother was recalled with great clarity. The programme was beautifully made and the four people interviewed provided a wonderful description of their schooldays and the rural Ireland of the 1930’s.

You can watch the programme here:

Christmas at school /Natale a scuola

Classe 2^B – Scuola Primaria “A. Ciancia”-Francavilla in Sinni (PZ) – Italia

The stats helper monkeys at WordPress.com mulled over how this blog did in 2010, and here’s a high level summary of its overall blog health: 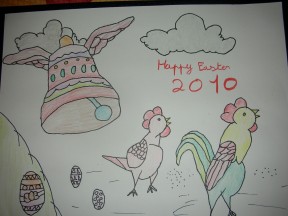 About 3 million people visit the Taj Mahal every year. This blog was viewed about 38,000 times in 2010. If it were the Taj Mahal, it would take about 5 days for that many people to see it.

In 2010, there were 17 new posts, growing the total archive of this blog to 186 posts. There were 37 pictures uploaded, taking up a total of 33mb. That’s about 3 pictures per month.

The busiest day of the year was April 1st with 486 views. The most popular post that day was Joyeuses Pâques 2010.

Where did they come from?

These are the posts and pages that got the most views in 2010.

The History of Halloween October 2008
6 comments

Next Page »
Traditions across Europe-an eTwinning project
Blog at WordPress.com.